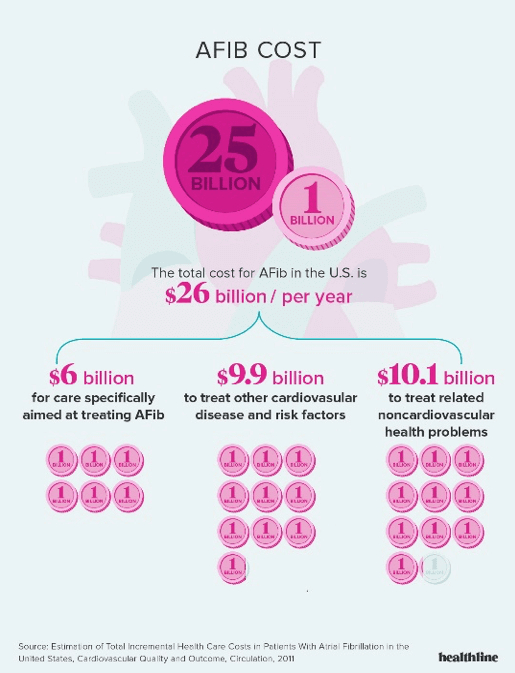 Atrial fibrillation (AF) is the most common type of arrhythmia. Currently, AF impacts nearly 5million people in the United States alone and is expected to double by 2035. AF is a silent epidemic that is growing significantly faster than previously expected. The reason for this accelerated growth is primarily driven by two factors. First, an increased aging population—atrial fibrillation prevalence increases from 1-2% in the general population to 8-10% in octogenarians—thus with increased life expectancy the prevalence of AF is also increasing. Second, improved detection—today with more availability of wearable technologies the ability to detect arrhythmias such as atrial fibrillation has exponentially improved—driving the increase in prevalence of the disease.

The Problem by Numbers:

Some people with AF may not experience any symptoms that might alert them to the disease, rather it is detected during a routine visit with their doctor. Others with AF, more commonly experience one or more of these symptoms:

Early intervention and treatment for AF are essential in reducing the risk of stroke, heart failure and in some cases death. There are a variety of treatment options for AF, including medications, procedures such as catheter ablation and even surgical procedures. The right treatment approach should be discussed with your doctor and if needed a referral can be made to discuss options with Cardiac Electrophysiologist  (cardiologist that specialize in atrial fibrillation management). Whether you and your doctor decide on one type of treatment or a combination of treatments, research has shown significant results in reducing the number of, or eliminating, AF episodes.